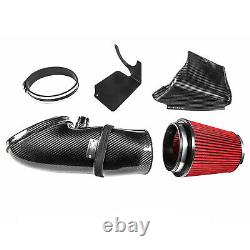 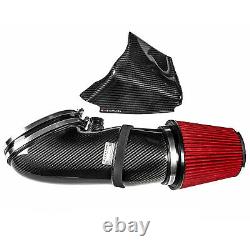 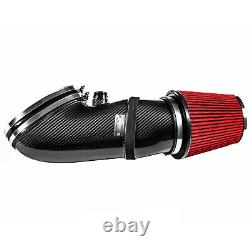 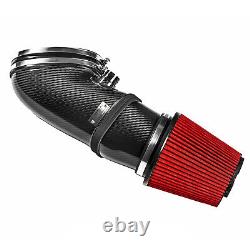 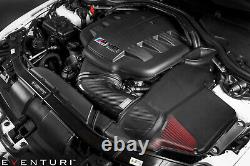 The BMW E9X M3 Eventuri intake system is the result of extensive research and optimisation which improves possibly one of the best designed stock intake systems we have seen. The E9X stock airbox system is a brilliantly designed intake with an excellent flow path and feed system for ambient air. However on closer inspection, there are restrictions in the inlet tube connecting the airbox to the inlet manifold. By redesigning the tube yet maintaining the airbox, we have been able to allow the V8 engine to breathe with greater efficiency and therefore gain power. In addition to the new tube design, we also identified a further restriction in the air feed system.

To overcome this we designed a scoop to allow an increase in airflow through the airbox. This reduces inlet temperature values further and adds to the performance gain of the system. The Eventuri E9X M3 intake system consists of a number of components engineered to perform a specific purpose and fabricated to the highest of standards. Here are the details for each component and the design ethos behind them. Each intake system consists of. High Flow Urethane Cone Filter. Laser Cut Stainless Steel Debris Guard. Silicon Coupler and OEM specification clamps. The intake tube was designed to improve the airflow path compared to the stock tube - from the filter to the manifold. It is a 1-piece design which has no internal interfaces and therefore provides a much smoother path for the airflow to negotiate. Furthermore the geometrical transition is from a circular opening for the filter to the oval exit for the manifold. This is a much more efficient change in shape when compared with the stock tube which has to transition from a rectangular opening for the filter to the oval exit for the manifold. An important challenge to overcome was the requirement of movement with the engine. Instead of using silicon couplers with flexible sections (which would introduce similar interfaces as the stock tube), we designed the tube itself to be able to move with the engine. The tube has a compressible neoprene band around the section which interfaces with the stock airbox. This section seals the tube to the airbox yet allows movement in and out of the airbox as the engine moves.

By allowing the tube itself to move - we have been able to create a flow path which is as smooth as possible. The E9X M3 airbox system is saturated with cold air from 2 feeds : a lower feed from underneath the headlamp and an upper feed from behind the kidney grills. The primary feed is the lower one from underneath the headlamp as it connects directly to the airbox with minimal change of direction and a large opening to the airbox. This is also a high pressure area of the car and airflow moves through the airbox from underneath to the exit at the top connecting to the exit vent in the bonnet.

The other feed from behind the kidney grills which, although is a welcome addition, provides a much lower volume of air to the airbox than the lower feed. This is because airflow has to change direction through 90 degrees twice and also because the duct narrows down significantly before the entry to the airbox. Looking at the lower duct more closely, it becomes clear that the duct has a large ridge which comes back on itself just before the opening to the airbox. This acts as a barrier which inhibits direct entry of airflow to the box by reducing the entry speed of the airflow. By designing a scoop to sit on top of the stock duct and curve up sooner to eliminate this ridge - airflow is now allowed to transition from the duct to the airbox without restriction.

The airflow path is much smoother and as a result, the velocity of the air entering the airbox significantly increases. This allows the intake temperatures to be lower than without the scoop : we have data logged IATs road where we managed to reduce intake air temperature by 2 degrees using the scoop.

To illustrate the effectiveness of the scoop, we devised a simple experiment with a leaf blower to generate flow and an air speed meter to measure the speed of the air entering the airbox. We secured the blower in one position so that it pushed air directly into the lower duct and placed the meter inside the airbox to measure the speed coming in. Results showed a significant increase in speed of almost 50% when using the scoop. The full testing video can be seen in the Video Tab. The final component is a debris shield attached to the filter - this deflects debris and water from impacting the filter directly.

With the increase of airflow entering the airbox with the scoop - this is an important addition. There is no negative impact on performance since the airflow is not impeded through the airbox - temperatures are still lower than stock.

Please note: The majority of Eventuri orders are processed straight away, but occasionally some applications have to be special ordered which may take around 4-6 weeks to dispatch. If there will be any delays in your order you will be informed within 24-48 hours.

Image for illustration purposes only. This item is in the category "Vehicle Parts & Accessories\Car Tuning & Styling\Air Intake & Induction\Performance Air Filters". The seller is "haz_motorsport" and is located in this country: GB. This item can be shipped worldwide.